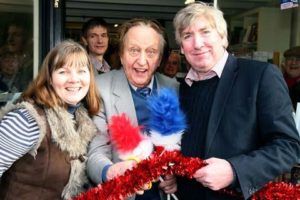 If you live on Merseyside the chances are at some stage in your life you’ve seen Ken Dodd performing live, opening a garden fete or simply out and about.

In some ways Liverpool is more like a village than a city and Doddy was THE original local boy who made good but unlike the other fab celebrities he continued to live in the place where he was born and cut those amazing comedy teeth.

I first encountered him at the opening of the annual Alder Hey hospital garden fete back in the sixties. As a 10 year old boy I sneaked in to the head of the autograph queue below the elbows and handbags. He looked down at me, smiled, gave me a signed photograph and said “Alright,general? “

I nodded my head nervously and stared at his wild hair, fantastic buck teeth and red and blue tickling sticks….. Just like on the telly only in colour, I thought.

If you were lucky enough to meet him, he took up all your attention visually, swallowed you up.

And that’s before he even started cracking gags.

The next time I saw him in the flesh was a few years later when I was working as an assistant at ‘K Shoes’ on Church St in Liverpool. He marched in, said hello to staff, shook hands with customers, cracked a few gags and walked out empty-handed because he said the shoes were too expensive.

Years later as manager of BBC Radio Merseyside I saw him regularly. He’d come into the station for tv or radio interviews and take the mickey out of anyone in authority – indeed anyone who took themselves too seriously or whom he thought needed bringing down a peg or two, and that was everyone!

He used to bow when he saw me, calling me ‘Lord Ord’ with mock,exaggerated respect.

About 20 years ago he phoned me and asked if he could have a meeting about a radio comedy show he wanted to present.
When we met I told him that we simply didn’t have the budget. Some of our presenters received just £25 or £30 a programme and for him we’d need to provide a producer, scriptwriters…..well out of our league.

But sharp as a razor on a cold Knotty Ash morning, he’d already prepared for that one. He knew beforehand what my reaction would be. He’d appeared on the airwaves of Radio Merseyside many times including its first day of broadcasting back in 1967, so he knew the score.

He made me an offer I couldn’t refuse.

The deal was he wouldn’t ask for any money as long as we found a way of paying a bit to some of the other up-and-coming local comedians and comedy writers whom he wanted to work with.

So completely against all BBC pay and HR guidelines I took him on and he presented an 8 week comedy series on Sunday afternoons much to the delight of everyone. Other would-be scriptwriters and comedians got the chance to work with a comedy legend, our listeners got to hear Doddy on the radio for the first time in years and I didn’t have to break the bank to pay towards the show.

I have a suspicion that he also paid them some cash but of course I have no proof of that, m’lud.

Much more than a comedian

There were silly rumours knocking round for years that he was mean but I can honestly say I’ve seldom met anyone so generous  in spirit as Ken – he was delighted to be knighted (“eventually”) but to me it still feels a bit wrong to call him ‘Sir’.

Whether it was opening garden fetes or just chatting to his fans he was genuinely – cliche alert – a man of the people. No, really. I’m told his last gig was at the Liverpool Echo Arena (where else?) playing to 2,000 people before Christmas and making them laugh as ever, even though he was not in the best of health. Indeed he’d planned to return to the Literally bookshop in New Brighton for a public appearance and as ever, a mini-gig if any of his comic appearances could ever be ‘mini’.

It’s great that there’s been a statue of Ken at Lime St station for many years….and no doubt there’ll be other memorials to him celebrating his comic genius.

But lots of us will remember him as a genuinely warm and funny guy who seemed to have had time for everyone.

It was a privilege.