KFC – staying bullish while running out of chicken

KFC – staying bullish while running out of chicken 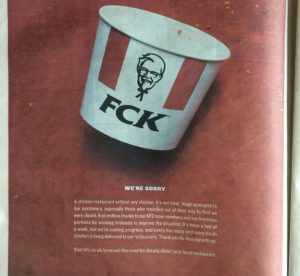 When the story broke about KFC running out of chicken it reminded me of the famous Monty Python Cheese Sketch where Michael Palin plays a cheese shop owner who leads customer John Cleese up the garden path about the types of cheese he stocks only to eventually reveal that he hasn’t actually got any cheese of any description in the shop and that he’s been completely wasting the customer’s time.

In KFC‘s case what started off as a farce seems to have avoided becoming a tragedy thanks in part due to a bold and at times cheeky external comms policy which has gone some way to ensuring their customers stay loyal despite the ‘erm lack of chicken (fried or otherwise) in many of their branches.

They took out cheeky adverts in two tabloids (see above) explaining what went wrong AND took the mickey out of themselves but not in an arrogant or complacent way. Indeed the ads themselves became a media story.

Arguably there aren’t too many businesses where this policy might work but so far it seems to have done the trick for KFC.

The logistics failure involving their new distribution partner DHL is not the dominating narrative in the company’s version of events.

It has taken second place to their efforts to remedy the situation, using humour and complete confidence in the product to move the narrative forward.

It sounds easy but so far it’s been done with real skill.

How have they managed to do this?

Whatever has gone on behind the scenes, KFC‘s communications team has not tried to avoid the farcical nature of the problem in public. They’ve confronted the issue head-on with a bold two-pronged attack that embraces the issue in a humorous AND serious way, treating its customers like intelligent people rather than dolts.

As I’ve written previously, in crisis communications planning attack is the best form of defence –  https://mickord.com/crisis-communications-planning-attack-is-the-best-form-of-defence/

The underlying message seems to have been – “We’ve cocked up here big style, but bear with us because we still value your custom and even though we certainly look daft we’ll sort it out.”

Customers realise that although there has been a huge failure of service they seem to be handling the negativity with a savvy you seldom witness when such a high-profile company hits the headlines and teeters towards becoming a laughing stock. They mustn’t get complacent though as they’re not yet in the calm zone –  an ill thought-out-tweet can change all that .

Home page headline -“The CHICKEN crossed the road, just NOT to our restaurants..”

Followed by a brief explanation of what has gone wrong – “We’ve brought a new delivery partner on board,but they’ve had a couple of teething problems – getting fresh chicken out to 900 restaurants across the country is pretty complex! [find our more].. “

“A chicken restaurant without any chicken, it’s not ideal”..

So instead of being defensive and engaging in a finger-pointing blame culture and shouting “It’s not OUR fault”, they’ve put their hands up in public (essential), acted quickly and not let the media and the anger from some of their customers set the agenda.

I can think of a few other crisis-hit organisations in the news recently where that certainly hasn’t happened.

The KFC team seems to have leap-frogged the negativity and put forward the message that they’re on the case and that the service WILL improve soon – indeed they’re already pushing a few customer loyalty benefits for when all the branches are open again and 100% functioning ; so they’re publicly planning for the time when the crisis is over,which shows confidence in the brand and optimism for the future. 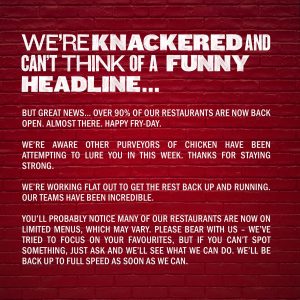 Tone of tweets is cheeky & authentic

The empathetic and witty tone of their public messaging seems to have touched a nerve with their customers across all the media platforms – a wrong step might well have made a bad situation much worse and the company will still need to stay on case and can’t afford any more public cock-ups.