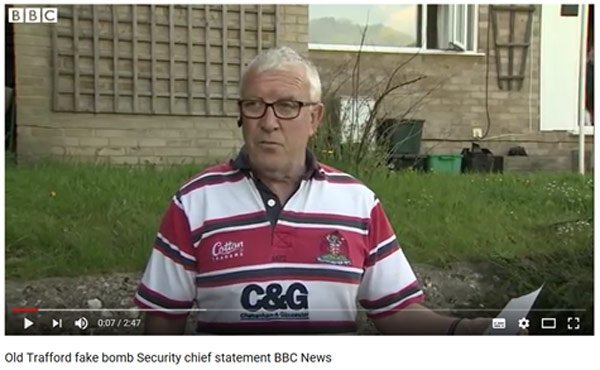 The owner of the security firm giving an unflinching, full-throated apology

Contrast what happened at the Hope and Glory festival with what happened at Manchester United’s Old Trafford ground in 2015 when an unclaimed bag left in a changing room resulted in a full evacuation of the ground and cancellation of a match leaving 75,000 football fans disappointed.

On this occasion it seems that the spokesman/owner of the security company broke all the established rules of traditional crisis comms.
He was reading from a prepared statement and did not answer in a full Q and A with reporters about what went wrong.

Maybe this case is the exception which proves the rule, but he gave an unflinching, full-throated apology for the error which led to the evacuation and its costly implications.
Instead of witnessing another smart-suited performance from a polished PR professional tv viewers saw a security company boss in ordinary workaday clothes issue an apology but also reminding us of his previously impeccable record in the industry over a period of 30 years.

He did not take questions from reporters but covered as many angles as was necessary during his few minutes of infamy.
I’m not suggesting that this approach would work in every -or even any – other scenario but my point is that it worked then and in a sense that is all that matters.
Clearly someone in authority at the club decided that the security company were best placed to face the press and despite the disappointment of 75,000 football fans at the game having been cancelled I believe the choice of spokesman reflected well on the company and the club on this occasion.
No dodging bullets, no slick PR sheen just the basic, honest truth.
He comes over as authentic and credible. Someone,somewhere in authority deserves credit for a fleet-footed decision to use him as the spokesperson.

How often can you say that when someone has come on the tv to talk about such a huge error?
Crisis managing the media is about planning beforehand but it’s also about thinking on your feet.
The decision to put forward Chris Reid, the owner of the security company, was clearly the right decision in the circumstances. He admitted blame for the evacuation and took full responsibility for the subsequent damage caused.

In the Hope and Glory Festival cock-up nobody seemed to take responsibility quickly enough… it became a toxic decision that even the organiser (who said he took “ultimate responsibility”) did not act like a man whose words were followed by decisive actions.

And that’s the point.

When a crisis develops who in your organisation will make the decisive decisions and follow them up with clear, direct and honest words and actions?
That’s where we come in.

By helping you and your teams to cope with the media pressure on the day and working with you to produce a crisis communications plan designed to the needs and strengths of your company.